Mr. McGuire: I want to say one word to you. Just one word.

Mr. McGuire: Are you listening?

Benjamin: Yes, I am.

Benjamin: Exactly how do you mean?

Mr. McGuire: There’s a great future in plastics. Think about it. Will you think about it?

When Walter Brooke, as Mr. McGuire, spoke those words to Dustin Hoffman in his legendary role as Benjamin Braddock in the classic film The Graduate, audiences would not have known just how enduring the future of plastics would be. Since 1976, plastics have been the most used material in the United States and will most likely continue to be used in many years to follow.

However, plastics have a bad rap for the ways that they negatively impact the environment; it is inexpensive to make and easy to discard. Plastic morphed from an engineering triumph into a global plague. A 2000 survey conducted by the American Chemistry Council (ACC), discovered that fewer than half of Americans had a positive opinion of the miracle material; and 25 percent “strongly believed” that plastic’s environmental negatives outweighed its benefits.

Plastics are ubiquitous; they are an intrinsic part of our modern world. Plastics are incredibly useful, and despite their reputation, can be an energy efficient alternative to their glass and aluminum counterparts. Plastics are not only energy efficient, but saves the United States dollars by the second. In a recently conducted test, researchers found out that by using plastic over other materials such as glass and metal, the United States economy could save over $336 trillion. Plastics certainly have made a home in our world’s economy as the “useful innovation of the millennium.” 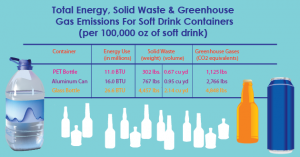 However, plastic requires more than just an image makeover if it’s going to make a positive contribution to a more energy efficient, less disposable world. The solution may be for plastic to keep doing what it does best—evolving, in essence, to become a better substitute for its current form; to focus not solely on what new plastics will be used for, but where they will go when they’re thrown away, and then engineer them to break down accordingly.