Generally, the mass population views manufacturing as beating hammers, arduous physical labor, and ancient assembly lines: employees don’t have to ponder their actions, due to their robotic movements.  Manufacturing has come light years since its birth in America.  Gone are the days of little pay, few benefits, and the distress of job outsourcing.

U.S. manufacturing, ‘made in the USA,’ is making its resurgence.  Factory employment has increased for the first time in more than a decade: 500,000 jobs created in three years.  The perception is manufacturing in the United States is slowly vanishing, and it may have appeared that outsourcing would be the demise of the American worker. Nevertheless, 30% of the country’s productivity progress is due to manufacturing.

Countless companies are reestablishing their manufacturing presence in America: Sleek Audio, Peerless Industries, The Coleman Company, NCR, Walmart, and Apple.   Companies are parting with their Chinese industrial divisions to move back to America; production in the U.S. will attain cost efficiencies, increase local control of the manufacturing process, and curtail lead times.  Mounting shipping and manufacturing costs have companies concerned about their future in China.

According to experts, the cost advantage associated with China is steadily declining.  American companies have won substantial allowances from Unions in the past 10 years; meanwhile, China’s middle class is demanding increased pay.  The United States has access to cheap energy, and its factories are profiting from the shale boom.  Planes and ships are transporting goods and materials thousands of miles outside of the U.S., and this translates to steep fuel prices.

Despite the sheer size of U.S. manufacturing, 10th largest economy in the world, China has the upper hand on future transportation.  China’s high-speed light rail system stretches from Beijing to Guangzhou to Shenzhen, and it will continue to challenge airmail rates.  The expansion of a high-speed rail system in America trails China by eons, yet China’s infrastructure lacks that of the United States’.  China’s sprawling cities possess millions of consumers, and this is its epicenter; its wealth is exceptionally concentrated.  The United States has a retail foundation stretching to secluded areas of the country due to the middle-class population base throughout the country.

An advanced breed of manufacturing is spreading in America: specialized manufacturing.  Specialized training and computer skills are in high demand because of progressive technologies and an increase in machine quantity.   Mastery of these machines is a necessity, and countless manufacturing positions are now demanding a 2-year technical degree, soon to be a 4-year degree.

Manufacturing in America is evolving and making its comeback.  The U.S. has solidified its place as the largest manufacturer of goods. 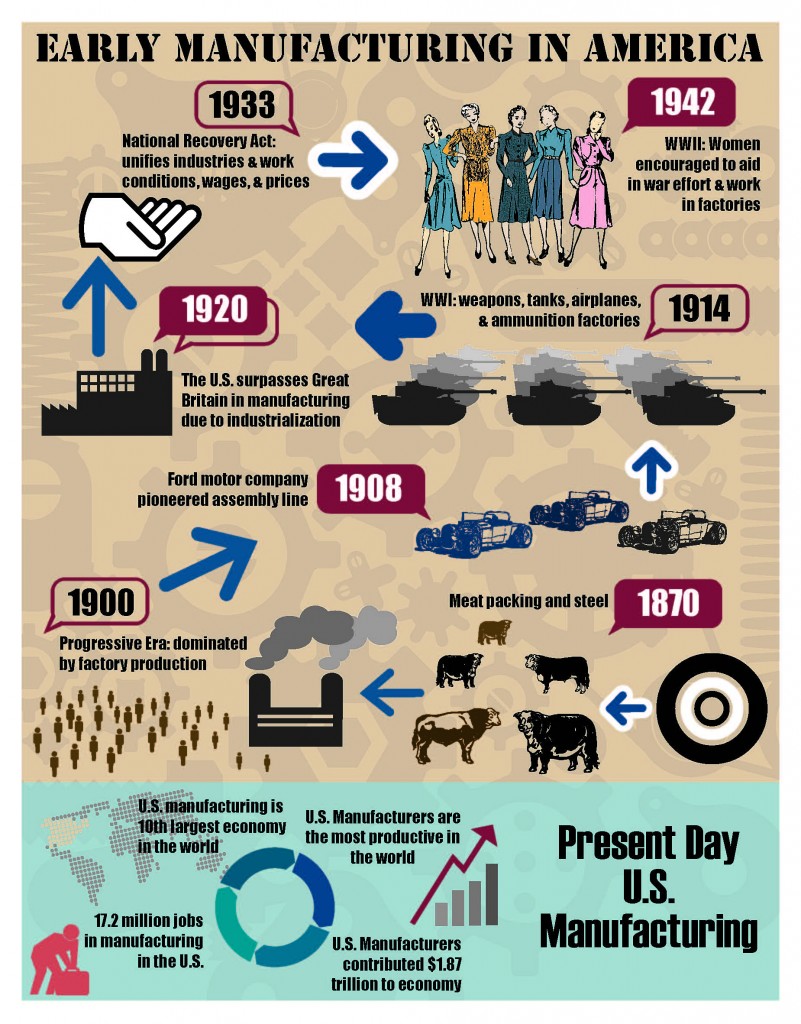