What is a smart grid?
Just as smart phones have evolved into multi-purpose devices that support a wide range of applications, smart grids have become a way to computerize the electric utility grid and better manage the increasing energy needs of 21st century consumers.

The “grid” encompasses all the networks that carry electricity from the plant where it is generated to the homes and office buildings where we consume it. Smartgrid.gov refers to our current grid as an “aging infrastructure” set up to handle only simple energy demands.

For the past 100 years, utility workers have had to go out to gather much of the data needed to provide electricity — reading meters, looking for broken equipment, measuring voltage, and so on. And most of the devices utilities use to deliver and manage electricity rely on manual or analog systems. Now, the electricity industry is taking great strides to modernize the process. 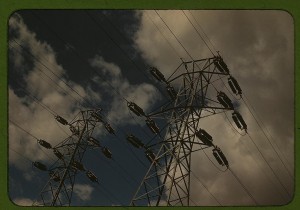 A smart grid system digitizes data collection and also acts on information about consumer behavior — similar to the way Google learns your online searching habits and Netflix knows your movie preferences. Each device on the network has hi-tech sensors to gather data and automation technology that allows the utility company to adjust and control each individual device or millions of devices from a central location.

In addition, a smart grid system can

Who supports the smart grid?
In 2007, Congress passes the Energy Independence and Security Act, which supports the DOE in leading and coordinating a national grid system. Such a system would involve upgrading the current system or replacing it altogether. Smartgrid.gov advocates that a modern grid be constructed “from the bottom up to handle the groundswell of digital and computerized equipment and technology dependent on it.”

In 2009, the Obama administration allocated $3.4 billion in grants as part of a stimulus package to help utilities develop and implement technologies such as smart meters, digital transformers, and automated power monitoring and management systems.

We have seen smart grids deployed on a smaller scale in cities like Austin (2003) and Boulder (2008), and several areas in Europe and Canada are currently working towards large-scale smart grid systems.

Smart grids are designed to give consumers more control over their energy use. Imagine monitoring and managing electricity just as you do your bank account. Smart grids will provide a clear and timely picture of how much electricity you use and when it costs the most to run.

To learn more, download the DOE’s Smart Grid System Report, and check out unitherm.com for more ways to take control over your energy expenses.