The mindset of “if it isn’t broke don’t fix it” is a thing of the past. It is a mentality that even the best of us have been guilty of from time to time. While it may sound like a good idea, it can be damaging to a company in the long run. Staying the course down a single path can lead to a business owner getting blindsided by future problems. Just because something is working at the moment, doesn’t mean that future problems won’t arise. The new trend is to start protecting your investments and wellbeing by stopping the problem before it ever begins with proactive maintenance.

Stop The Problem Before It Happens = Greater Savings

Whether you’re trying to make the most of an ever-dwindling staff and budget, or looking for even more ways to trim operations and maintenance costs, preventative maintenance on equipment and facilities can help save time and money in the long run.

The key point to preventative maintenance is stopping the issue before it ever begins. While there are some expenses related to running a good proactive maintenance program, it costs less to properly maintain equipment and facilities than it does to repair the damage from a premature breakdown or early deterioration of property.

maintenance leads to an improvement in the overall safety and reliability of the system. Planning and management of asset maintenance improve the life cycle of the assets and keeps them performing at peak productivity levels. As a result, costly unplanned downtime is minimized; workforce productivity increases; and asset lifecycle and return on asset (ROA) are improved.

Regular improvements to the process for better machine efficiency and product quality increases maintenance productivity by detecting and identifying potential equipment problems before they grow. This reduces the frequency, severity, and cost of repairs while enabling your team to avoid unnecessary and unproductive tasks.

More efficient and frequently maintained work environments (including equipment and personnel) lead to a safer work atmosphere. When machines break down and errors occur, accidents are more likely to happen.

Where Does Insulation Fit In?

Insulation is built upon the idea of proactive maintenance practices. Insulation does all of the benefits listed above plus more. Once installed, your insulation needs no further maintenance. So you can feel good, knowing you are doing your bit for the planet while creating a more efficient and more collaborative work environment, to reduce costs and support your organization’s work processes.

You can head over to our online shopping cart and check out all of our possible solutions for your facility. For as little as $16, you could be protecting yourself, your employees, and your business for the future.

For more information about our products and UniTherm, check out our website and social platforms: 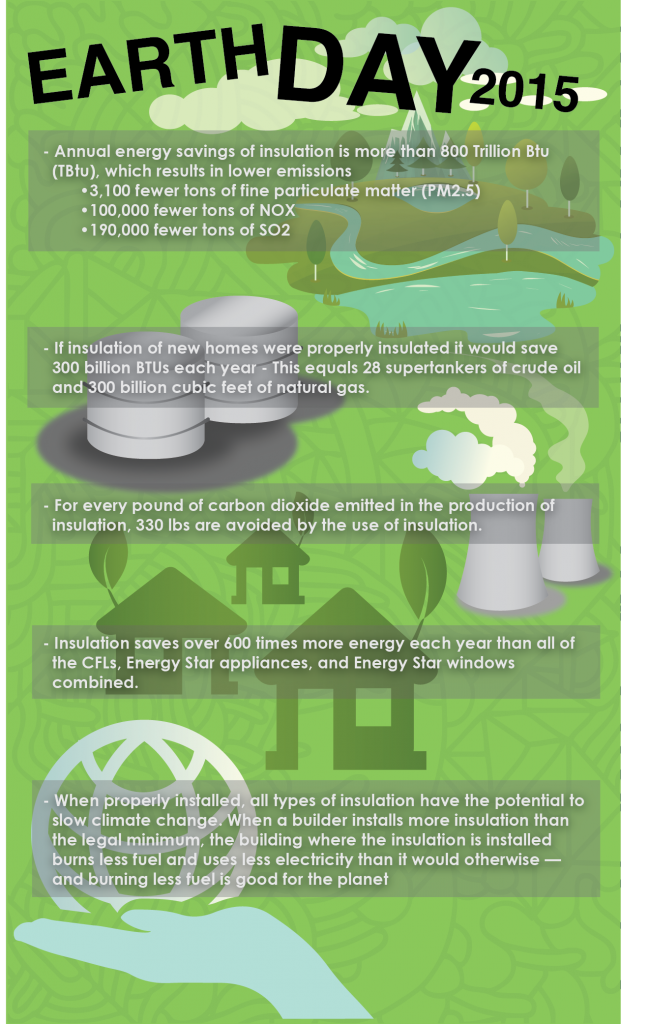 Manufacturing is one of the remaining sectors that provide high-paying jobs to workers without college degrees. For high school grads, earning potential in manufacturing exceeds earning potential in construction, logistics, and hospitality, other sectors that generally don’t require post-secondary education. Workers in manufacturing can get in on the ground level and work their way up to management positions, garnering raises and benefits along the way.

Is this all about to change?
According to the April Job Report by the US Department of Commerce, the education level in the manufacturing workforce is rising steadily: in 2011, 53% of all manufacturing workers had at least some college education, up 10% from 1994. 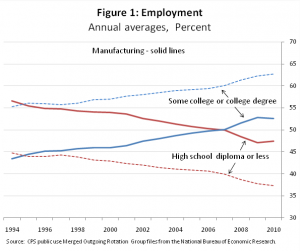 image from the US Dept. of Commerce

What does this mean for manufacturing?
Because the manufacturing sector has begun building a labor force of higher-educated and higher-skilled workers, factory work isn’t what it once was. Today’s high-tech manufacturing industries take advantage of innovative engineering and state-of-the-art machinery—no longer the dark image of 17th century industrial life portrayed by Dickens.

A skilled and educated work force will keep US manufacturers competitive in a global economy and will spur technological advancement. In fact, House candidate Dan Kildee claims that any disinvestment in education is bad manufacturing and industrial policy: “Its just bad policy to not educate the kid who might have the next billion dollar idea. We have to create productive produces in this country.”

Hopefully the up-skilling trend won’t bar the middle class workers it once sustained. Rising education levels may encourage students and current members of the workforce to pursue degrees or certificates in manufacturing-related fields. Grants and scholarships in STEM (science, technology, engineering, math) education abound, and many manufacturers support employees (via time off or funding or both) as they continue their education.

It’s a tough truth. In math and science, American students rank far below their international peers. So as the world accelerates towards technologically advanced everything, will American innovation fall behind?

We created the Colt revolver. The vacuum cleaner. The hearing aid. The light switch. The jukebox. The oil well. The metal detector, the microwave oven, the AC motor, the sewing machine. We developed Morse Code and cable TV. We implanted the first artificial heart. We built the first computer and set up the Internet. We flew the first airplane and landed on the moon.

So what happened? Probably a combination of things. According to the National Science Foundation (NSF), “During the economic turbulence of the 1970s and 1980s, it became clear that industry and academia had become estranged from each other. Manufacturing-related scientific research at the universities wasn’t making it out into the real world quickly enough, if at all.”

Furthermore, NSF explains that to succeed in today’s hi-tech society, “students need to develop their capabilities in STEM (science, technology, engineering, and math) to levels much beyond what was considered acceptable in the past.”

Some call it the STEM Crisis or the Skills Shortage. America simply isn’t producing enough STEM graduates, and so our tech firms are pushing to expand visa programs and hire more foreign workers to fill the gap. Meanwhile, other countries like China and India have gained a competitive edge in qualified labor. In electronics alone, Asia is responsible for 90% of the world’s research and development.

What are we doing about it? Since the 1980s, various public and private entities have worked to bridge the gap between STEM supply and demand in America. The shortage of STEM grads means we lack qualified researchers and practioners as well as qualified educators to stimulate growth in STEM fields. Thus our problem is two-fold.

One approach involves offering incentives like scholarships, loan-forgiveness, and higher pay aim to attract more teachers to STEM fields. According to Time Magazine, Math For America provides $100,000 fellowships for math teachers and Partners in Science gives science teachers the opportunity to undertake actual scientific work at national laboratories during the summer.

Another approach involves exposing students to STEM subjects early on and amping up primary and secondary education to better prepare students for these rigorous careers. Scholarships, hiring bonuses, and other attractive incentives target students as well. Many STEM programs are working to retain entering STEM majors (60% of whom will switch to non-STEM majors after taking intro courses), and they are pushing for greater enrollment of women and non-Asian minorities, who currently hold a disproportionately low share of STEM degrees.

The US Department of Labor projects that 2 million STEM-related jobs will be created by 2014. Post-recession job growth is great news, but that projection gives us less than 2 years to prepare 2 million workers for STEM careers. It seems the gauntlet has been thrown. Can we rise to the challenge?

To keep up with news on the economy, employment, education, and other industry updates, subscribe to our blog.

2011 has been an exciting year at UniTherm International! Over the last year, we’ve taken major strides in improving our facility and R&D capabilities, strengthening marketing efforts, and broadening our representative base. We’re pleased share a sneak peak inside UniTherm HQ to show you changes we’re making to improve our products and services.

Using state-of-the art technology and equipment, UniTherm engineers are more focused on research and development than ever before. This year we’ve rigorously tested our products’ performance which has led to the release of new and improved models of FirePro, discovered new applications for UniVest and FlexWatt and even launched a new product, SolarShell.

SolarShell is a glass-reinforced, plastic laminate that cures and hardens when exposed to UV rays. Be sure to stay tuned for future SolarShell updates, as we’ll release a series of test videos for this multipurpose product later this summer. END_OF_DOCUMENT_TOKEN_TO_BE_REPLACED

What do radios, neoprene, instant photography and nylon have in common? All were developed during or slightly after the Great Depression and drastically changed the course of manufacturing history as manufacturers desperately sought ways to efficiently produce groundbreaking new products.

According to Boston Consulting Group’s “Innovation 2010” report, innovation in manufacturing is vital to your survival as a manufacturer after the recession because “your competitors are themselves working very, very hard to become more innovative—they, too, see innovation as a top strategic priority.”

Companies in countries like Brazil and China “are increasingly investing more in it, and have redoubled their efforts in order to be positioned to thrive in the recovery,” making R&D more important now than ever before.

While many are reluctant to budget money for R&D, researching more efficient ways to create products can lead to substantial savings. Often, existing employees already have ideas that could lead to improvements or even a revolutionary new product line.

Companies can develop agile and adaptive manufacturing systems by including modeling and simulation tools into design processes and installing superior sensor and part genealogy systems to detect errors or defects before they effect an entire production run.